This week the celebrations have begun commemorating 200 years of the Netherlands as an independent Kingdom (1813) or monarchy. Historical inaccuracies and myths still abound about the establishment and foundations of the Netherlands in the early part of the 19th century.

Introduction
There is very little material in English on the history of the Dutch monarchy, especially showing more recent developments put in a wider historical context. This essay provides a brief overview for foreign students of Dutch history.


The Dutch notably had already been a kingdom during the preceding years 1806-1810. After the Dutch nation was captured by the French in 1795, the first experiments in democracy (1795-1806) more or less following the French revolutionary model proved to be rather shortlived and were finally replaced by direct French rule.
From 1806 Louis Bonaparte (a brother of the French emperor) was put on the throne of the so-called Kingdom of Holland. In the following years he became liked and respected by the Dutch people. More and more historians nowadays tend to agree that this short period of foreign rule actually proved to be quite beneficial to the Dutch people. For instance, most of the foundations of the new state and society (important institutions, regulations and laws) were laid during this period. This institutional framework proved to be very important in providing continuity.


The re-instatement of the royal family of Nassau-Orange, after their initial flight in 1795 to Great Britain and subsequent exile in Germany, was mostly brought on as the result of international diplomacy in the years 1813-1815. A new biography by John Dew of one of the key players in all of this, Lord Castlereagh, has gone all but unnoticed in the Netherlands (demonstrating the increasing isolation of Dutch historiography from the wider European context).
However Dutch historian Beatrice de Graaf has recently uncovered documents showing several ways the new Dutch king William I (Willem I) has himself tried to influence matters abroad during this crucial period of formation of the kingdom, especially through an agent (baron Von Gagern) in Vienna where most of the diplomatic negotiations took place - the Congress of Vienna - after the fall of Napoleon. The Kingdom of the Netherlands, principally created as a buffer state against any possible future aggression of France, was thus doubled in size (with the addition of present-day Belgium) largely through the efforts of the new king.
Remarkably, there was also a strong continuation of politicians and the nobility throughout the different regimes since 1795. The Dutch regents (or politicians) proved very hard to unseat and the patriciate therefore underwent few changes between 1795-1813. Most recently they have been compared by Matthijs Lok to 'weather vanes', blowing in whatever direction. 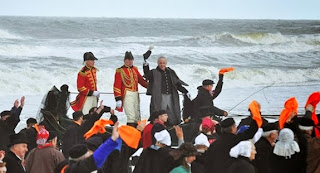 The first official event of the commemorations was a re-enactment yesterday of the landing on the beach at Scheveningen of crownprince Willem Frederik on 30th November 1813, played by a well-known Dutch actor. The landing has been re-enacted by a local society every quarter of a century since.
The actual landing in 1813 though took place at night which make claims like 'the whole of Scheveningen turned out for the event' hardly credible. This historical inaccuracy also makes every contemporary (and later depiction) of the event rather fanciful.


The formation of the Kingdom during the course of the 19th century was very much the work of three successive kings: William I (1813-1840), William II (1840-1849), and William III (1849-1890).
To underline this important fact, a set of new biographies of these rulers has been commissioned and worked upon during the past four years. They were presented on Friday 29th November.
Its authors were given unprecedented access to the private archives of the royal Dutch family. Although truly academic studies, the biographies have been marketed as especially 'revealing'. The biographies are also presented to the general public through an accompanying television series. 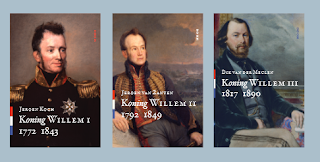 Perhaps in tune with more modern times, much has been made in the press of their extra-marital affairs. William I was rather authoritarian but also an enormous workaholic, despite having a second family; William II was blackmailed through his homosexuality into finally accepting a liberal democracy in 1848, and William III was at best a reluctant ruler.


The festivities surrounding the bicenteneray are the brainchild of a national committee. This oddly enough exists mainly of politicians and celebrities, with only one historian on board: Henk te Velde. They have chosen five democratic themes or achievements 'to take stock of our past, present and future':


These themes will form the backbone of six festivities or national events during 2013-2015, some of them more cultural in origin (concerts etc.).
A very useful website describing the events of 1813-1815, with direct access to a number of contemporary sources, has also been put up.

Traditionally, the Orange-Nassau family have been associated with liberty in the Netherlands but through the new Constitution of 1814 they more or less tied down the liberties of the Dutch people.
Henk te Velde underlines the real importance of this new constitution, the second oldest in the world after the U.S. constitution (1776). He especially stresses the way in which William I tried to build a nation, which was mainly embodied by the king himself whose responsibilites took up the majority of the articles of the new constitution (but was later toned down).
But even in the Netherlands older constitutions do exist: between 1796-1806 no fewer than four constitutions were drafted and introduced. Thus the events of 1813-1815 were more reactionary then revolutionary in characterization.


The absence of historians on the committee, who are anyway rather confused about the true legacy of 200 years of Dutch monarchy (liberty? national independence?), is perhaps best explained by the fact the Dutch nation at present is only bound together through the popularity of its monarchy. History has been rather unkind to all the other symbols of nationalism introduced in the 19th century.
Almost by default the monarchy thus has become the sole symbol of national unity. This only came about however later in the 20th century through a succession of female monarchs with very differing styles. The earlier 19th century monarchs were rather more divisive in nature.


Much was made earlier this year of the new king William-Alexander of the continuation of the Dutch monarchy through the use of the hermeline-lined cloak worn by all the kings and queens since 1815. However, it has recently come to light that in actual fact a new cloak was prepared for the inauguration of Juliana in 1948. And what's more: the bills were left unpaid.


Taken together with other symbolic novelties introduced during the time of the inauguration, there is real evidence the Dutch monarchy has become less concerned with historical precedents in providing a role model for upholding tradition.
Instead, the new order of the day seems to be style over substance in a bid for ever more popularity. This is nowhere better represented than in the increasing impotance given to the fashion statements of queen Máxima. The gradual loss of any real constitutional or political role over the past two centuries is the main reason behind all of this.


The new king himself meanwhile seems to prefer a loser style of governing. In Belgium for instance the new king Filip has taken up his old prerogative of granting a royal pardon; it seems highly unlikely this will ever happen again in the Netherlands. 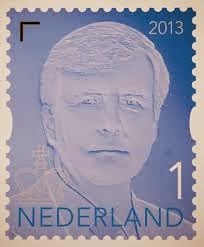 Just one day after its presentation last week, it was revealed the new poststamp depicting the king features a British instead of a Dutch crown by way of stylization. Instead of being a mistake, the designers said they did this on purpose. It is unknown whether palace officials were in anyway consulted on this matter.

It is yet another sign the Dutch monarchy is discarding or changing old symbols in the way it likes to represent itself to the people.